In the end of the 1930´s the Radio Corporation of America (RCA) had an idea of a new amateur receiver. But then the WWII changed their work, the need of a professional high-end military-grade receiver was high and the terms of ”cost was no object” pushed RCA to present the AR-88 early in 1941. This was a top creation from RCA, a communications receiver with high reliability in service as a surveillance and intercept receiver during WWII. 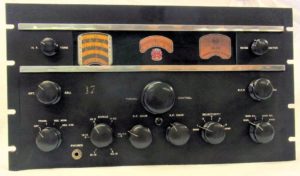 Despite the provisions in the Land-Lease act and the reaction from RCA, wich lead to that receivers rather had to be destroyed and not handed back to USA after the war, there were enough receivers spared or returned to the market as surplus. The AR-88 became a popular receiver for radio amateurs, who used them well into the 1960s.

My receiver have now been cleaned from dust and small wooden needles. It looks like it has been moved around a lot in rural parts of the country. Oil from leaking paper-capacitors had dropped down on the cabinet and spread all around the rim of the bottom-plate. This oil had dreid up and it took me a bunch of hours to clean that smeary thing away. I used a lot of alternatives for that (butter, rapeseed oil, white spirit, methylated spirit) and finaly nail polish remover (free from aceton!). Original rubber-feets were missing, but at the local IKEA store I found some replacement parts that could be used! The original RCA enblem, under the Vernier Tuning Dial in the center, had been replaced with an enblem from a town way up in northern Sweden, Kiruna. If this item has been used in a ham-shack up there is an open question.

The serial number can not be found stamped anywhere on the chassis. One example of an AR-88 receiver with a serialnumber on a special plate, screwed on the back of the chassis, can be found on the net.
My item have a lighter area at the same place on the backside, with the size that fits a serialnumber plate. That plate is gone, so the serialnumber of this item may not ever be known.

The label inside states it´s an AR-88D produced in Camden. It has all the characteristics connected to that model, alternating black and yellow scales for the six bands, screen-printed front panel, lack of a CL-meter, lack of AC-line fuse and ”REC MOD” / “REC CW” printed on the function switch. I have not yet been able to pinpoint the year of production, exept that the colors of the dial scale indicates its late WWII or even after 1945.

I have been asked for a scanned copy of the right window on the AR-88D. This is because that some of the units that was produced as AR-88D, afterwards has been equipt with an S-meter. And the original window with the emblem of “RCA” and name of the model “AR-88” has been thrown away. Here it is, if You want to make a new window, You can try to use this scanned copy! 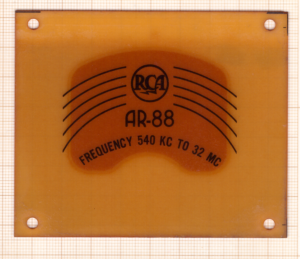 Now this receiver has been sold (may 2017) to a radioamateur living 24 km south of Linköping in southern Sweden. He longed to get started working inside this old receiver aiming to get it in full function.