This model of receiver is one of the famous oldies, produced in 1953. The SP-600 has been very popular amongst DX-ers and radio amateurs, though originally a Government/Military/Commercial receiver. 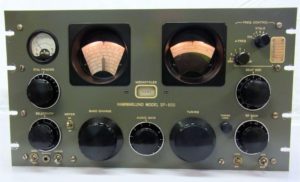 Here is the block diagram over the SP-600 JX receiver. 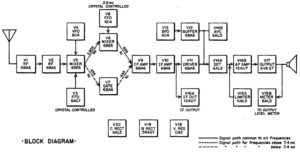 From being full of dust and dirt, this item now skines again after cleaning both the front panel and the interior. The scalebulbs was also dead and new ones had to be ordered (from Germany!).
An interesting equipment was attached to the antenna connector, a balun for 110 ohms incoming unbalanced to 75 ohms balanced on the receiver. The balun was made by Hatfield intstruments Ltd England, model AT 30F.

To check if the receiver is working, I will have to use the slow version. First with a short time switched on and then increasing the time switched on, with intervalls of rest for a couple of minutes.

Several articles are found on the internet regarding restoration and rebuilding.
http://www.ominous-valve.com/sp600.html
http://www.radioblvd.com/sp600_rebuild.htm

Now this receiver is sold (august 2016) to a young fellow in Härnösand, he just LOVES vintage receivers!!